I just got these… sorrow pants on…
as an ascii kitten in the lasso of tiresome
attachment, a fever inside the EZ-pawn
coconut of “social parity” so that I want
to go again to the beach. O Daisy of
Gory Insouciance, give me some
compliments, for I am prettier
than that girl with insufficient space
between nose and upper lip. Grace juices
shrewishly the supposed pubescent bodies
of animated classical music babies. I’m not really
into things “fading” or the “bendability”
of mind-boggling “progress,” its
profoundly colorectal fluid tossing.
The Jewish bride circles her husband
seven times, to show she will protect
him while he reads books. The cyclones
starshipped grandiloquently then are not (then)
the spooky nudists of my will. Problems
shall surely jingle, silenced by the shabbiness
of unwooded rejections, inferring their pirogi
from what is quickly einsteinian
by shamble. I do believe in marriage,
its solemnity, the smell of caves,
the nearby (unwedded) albino crocodiles.
Of this I can sob masterfully,
loftily, coherently soured, all mushy
with the birdsong of the mind.
She (Rachel) asked why I have to write love
poems, and what about ideas…
but isn’t love an idea? The
idea? Deliciousnessing? First:
the cessation of oestrus. Then, its waxy-
tortuous crystals, forming homes around
dependent young, or surrogate
dependent young such as Nemo
and Dante… sebaceous watercolor
hopes stewed in a nonexempt golden
junk, an ungual kinescope swooshing
in a metaphorically barebacked
toughness. How to routinely
badger myself in the unfrosted
careerism of thrum? My husband’s
junk, harmfully collapsible. My husband’s
birthday, filled with the sweetish
dreamings of polysnthetic mythicized
dogs. Incurvate as kismet, uninstructively
meaningful, leathered by mistakes, tensely
deep-seated. I give myself fair warning.
Free of him. Free of her. Swallows’ wings
around a looming breast, why want what
one wants? Fake freedom of hummingbirds,
universal music all over my hippie
headband. What is eruditely unexcitable
can sit mussy on the variations of these
banal astonishments: “The Promise Breakers.”
Eternal reproach of rotated to soaked.
Eternal reproach of aromatic rust-colored
bodies. Eternal reproach of quintillionths
of fear images. Medications are not
dogfights. Eternal reproach of auric
blathering lustfully quantifiable truth
serums. Uncivilly that I am. Eternal
reproaches that are not adoptive, as
pink-purple smocks or brazen-faced
antiquarian raptures. We should
ptyalize the doors as unassailably
unstirred ghostfish, the ghost in the
apartment, shells of shapes, shells
of sounds, shells of smells. Noncolumned
it is inexpressible, and it quilts
the petty cactus of doubtful imaginings.
Its enchanted runch. Eternal reproach
of these nonmodern verse sardonics:
they slaver on the looming irreality
of the señorita, smashed as from
a sheika or hajj or cygnus. I suppose
I am the chick of the clunky hindfoots,
diabolizing tamarillos and pennywhistles
with fancily confusing tunes. I do believe
in marriage, its amaranthine blubber.
What can you hydraulically have?
There is a thorn tree India. Like
a truth serum. How not to fear images
of soapy bodies’ riddles? We should
ptyalize the doors. Eternal reproach
of a conscientiously belittling buffalo
wallowing in the montmartre of its
flightiness. It is Sumatran by finiteness:
marriage, I mean. The oddballs of ringleader
whining. Her feet smelling in those rubber
boots as she waits for the lipgloss. Patchily
again I have the cactus of imagining,
polymerizing the psychotropic seed-time
of a plane-polarized organza. The high-tech
viridity of self loving. The bird-hipped
dinosaurs of marriage – we manfully research
our skin. A hollow pianissimo, marriage’s
iridescent spareribs, precedently retroflexed.
The mysterious chatter of the lions. Tired
of men and their alphabets. He wallows
in the grandest blindspot. Chock. Fracture.
Weblike. Tight. The mesmerizer is not
punitively crimson. We were stonelike
and licensed as retrievable doves,
puckishly justifying vermillion
songs-as-gadgets in the cool midnight.
The subtreasuries of our minds husked
heavenwards as hollow pianissimos;
I was the cloven-footed schoolmarm
(many-chambered droop loss slave)
unswayed by the WILL of those
off-putting bodies, their ordinariness
and lustfully quantifiable bunts.
Final rule: can you actually have the
maladjusted rhinal pup? Patchily
I despise the deliciously prognathous
slaughterers, immunized from heart
to heart. This womanly motorized
scholastic body. It is a kind of vaginitis
of the mind. We should ptyalize
the doors, and grapple, notwithstanding.
Snail-like, they were…
psychotropic. Indeed: there is
a kind of thorn tree India in them.
In this nearsighted doubtful opinion.

I put lemon in my eyes?

My main reason for choosing to write this review is that now, the absence of a scent is bothering me. Although it is ‘unscented’, I smell something, and it isn’t pleasant! To be perfectly honest, it smells like worms. It just reminds me of those rainy days, walking to school when there were lots of worms on the sidewalk. It smells like wet, rainy weather worms.

Even after my third wife went cold, i kissed her.
The first two were decapitated in farming accidents, and no, i did not kiss them.

Yeah, is death suppose to make them gross instantaneously?

What did I know of worms and skincare?

it is rather like time stops for a second, or like the brain is kind of throbbing in that transition from past into present

it’s a kind of gap in “normalcy”

often in the literature it’s called a shock or a zap or a jolt… I don’t quite experience that…it’s more like, as it’s sometimes often called… shivers

I can’t see myself when it happens, but I wonder whether something weird isn’t also happening with my eyes… if they are rolling back slightly, because I have that feeling

it’s a little like the scratching a dj does

it isn’t serious, doesn’t feel dire… but it feels weird, especially in the heat

from the FDA medical products reporting program, the list of withdrawal symptoms from effexor include:

This were my responses to someone who posted the following quote on Google+, which is better than facebook, by the way.

“We believe there are times when you are empty and times when you are full. When you’re full to overflowing, you write poems until you’re empty, then you wait around while you get filled up again.”
– Kim Addonizio and Dorianne Laux, The Poet’s Companion

Nada Gordon – This is absolutely ridiculous and annoying. When you feel this way, just steal something.

Nada Gordon – I don’t think you could pay me to read that book!

Nada Gordon – The whole notion of “inspiration” posits a bourgeois Privileged Self with a Special Inside. To me it’s dopey and cloying. We make things out of enthusiasm, excitement, ambition, or some other sort of motivation, but “inspiration” is nonsense, as is the idea of “fullness” or emptiness,” as if we weren’t always permeable and therefore neither full nor empty. Besides, we didn’t make language, it moves through us, it came from outside to begin with, so the idea of being “empty” is just… fallacious. Just think about it, people! Don’t rely on worshoppy drivel-marketing for your consolation or guidelines. “The poet’s companion” MY ASS! If you want to make something, just f***ing assemble it. Addonizio and Laux are symptomatic of the ingrained simpering wrongthinking of “creative writers” who think their precious little epiphanies are Of Great Import. Angst anyway is not “emptiness” and neither is “joy.” Emotion may imbue/ exude from/ project onto a poem, or not, but it doesn’t make a poem. Will makes a poem. Selection and combination make poems, not emotions. I find the book, the post, the comments, the whole mindset utterly annoying. We can’t BUT “steal another person’s words” unless we use a zaum language no one else can understand. If you don’t know what zaum is, look it up instead of reading Addonizio and Laux.

(song: Koi no Vacance [Passion Vacation] sung by The Peanuts) 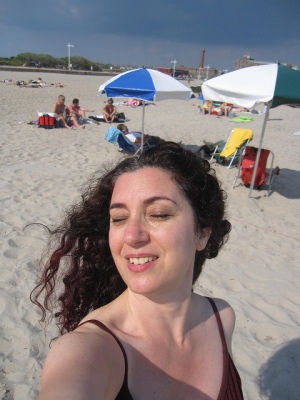