Still reeling, in a positive sense, from the Yinka Shonibare show at the Brooklyn Museum. How could I not like his work? It has all the elements I look for: fashion, color, cultural hybridity, inventive materials, intertextuality, and a playfulness that is somehow not not grave, either. He has said of it that he aims to be poetic rather than didactic, and I approve of the emphasis, but really it is instructive and thought-provoking as well as a festival of vivid surfaces.

In a piece like Gallantry and Criminal Conversation, one is given to notice a number of things all at once: the lively fabrics and their contemporary motifs, the giddy but harmonic color, the pea-green carriage suspended from the ceiling, the wooden trunks with their hidden possessions, the elaborate period design of the clothing, and not least, the randy positions of the headless mannequins (how can you not like that? Come on!).

What I hadn’t realized, so much, is that Shonibare’s work has been profoundly influenced by feminist thinking. I noticed that in his looped film of a masqued ball, in which a cross-dressed F to M courtier takes a central role. Also, his fascination with the figure of the dandy and with Oscar Wilde indicate that his interest in feminism might better be described as a desire to raise questions about contemporary gendering. Note the gender switch in this piece, How to Blow up two heads at once (Ladies), in which two women face off in a duel. 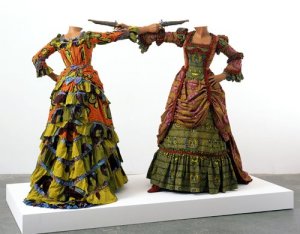 Perhaps it’s glib to consider dueling a form of empowerment, but the piece does serve to overturn expectations, and it feels charged even if, as a critic recently said, it is static.

I do love that it is a male artist, a black male cultural hybrid artist, who has taken up these themes, and who has exploited/appreciated/fetishized the intensely signifying textiles that are “Dutch wax prints.”

Today’s ensemble, I guess, was somewhat inspired by the exhibition, in that I felt moved to wear a colorful print, although not a Dutch wax one, this morning. I think the petticoat underneath as well expresses a yearning for the more complicated 18th century ensembles one sees in his work.

My look today is foofy (hi Laura!) and ultra-femme. “New York is my prairie,” I wrote beneath this photo on my flickr page. There are some days when one wants to dress against the city rather than for it. This frock, with its beautiful palette (gray-green background covered with magenta dots and lacy shapes, its baroque flower print in pale terra cotta, grayed turquoise, magenta, and salmon), edging of cream lace, and unusual faux-Grecian sash, perhaps errs a little on the side of the girlish, but if one can’t wear this on a hot day in July, what is life for?

Erika Staiti and I were discussing on facebook the relationship of people to their clothes. She initially asserted that clothes were nothing without people to animate them. I convinced her that, “people animate clothes, it’s true, but clothes also animate, illustrate, change, define, confuse, decorate, bewilder, and seduce people. You know? And then the alchemy of person + clothes goes out to intervene in spaces.” In a way, too, Shonibare’s headless mannequins are clothes without people, and yet they are, to me, very animated, and definitely performing interventions (as well as other things).

Re: ultrafemme. Someone’s gotta do it. It’s an underoccupied and somewhat shameful space. Why shameful? Laura began to think on this in her post. Perhaps I do it BECAUSE it’s shameful: I want to move through that shame to some proud stance of female impersonation. Wearing lace feels almost politicized. To me. Is that insane?

I haven’t always been this way. I went through a gamine period in my adolescence, and posted this photo today (from 1980, in Oakland: please note the Slits record in the background!) to prove it.

OK, just a note on yesterday’s bluebird outfit. Here’s the description I posted on FB:

Handmade-by-me wiggle dress (from a real vintage pattern) in black cotton with a print of blue birds on it. The birds are composed of little flowers and leaves in two shades of turquoise? Maybe they are supposed to be hydrangeas? Black flat sandals with silly bows on them. Side part with barrette. One faux crystal plastic bracelet of faceted transparent turquoise beads. Today’s look is prim and a little stupid!

I really did not feel comfortable in that dress at all. I think that some days I put on clothes that conform to some sort of identity that really is not in tune with how I feel inside, not even with my fantasies, and that discomfort shows in the stiffness of the photo. As the caption below says, though, I did make the dress, several years ago, and therefore had to wear it, to give my labors their due. I think it would have been helped by HEELS instead of flats, but my spine is a mess lately, and that situation isn’t helped by this compulsive post, and so, with that, I’m off to my dance class. Ciao!