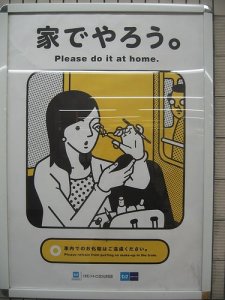 I know you returned to Japan not long ago for a visit. Since you lived there for 11 years, do you feel like commenting on how Japan has changed- and maybe on how it has stayed the same?

I noticed on my last two visits there that Japan, already techno-sleek, was getting even techno-sleeker. On the train, it seemed that everyone was writing a cellphone novel. More trains are equipped with screens showing commercials, news flashes, weather reports, etiquette reminders (a lot of these in Japan!), etc.

I heard from friends that Tokyo in particular had gotten much druggier. Drugs were not widely available at the time I lived there, although everyone worshipped alcohol, of course. It seemed that drugs had become a problem among students, as well.

Sociologically, it seems that there are fewer women foreigners working as teachers, as jobs are harder to find and/or not so remunerative, and the men who have stayed are married to Japanese women and have been there a long time.

What else? It’s easier now for non-Japanese speakers to navigate the train system, as train announcements and signage are now in English as well.

There has been a kind of gentrification in the old neighborhood I used to work in, Kanda, which was once mostly for salarymen and now has a profusion of new restaurants among the gritty workaday downtown atmosphere. You can sit at one of the modern pubs (nomiya) and place your order on a little tabletop computer. The food is divinely inventive, and puts ours to shame, but then, even the worst Japanese food does that, pretty much.

“Convenience stores” there have gotten even more convenient, and their food offerings are also exciting. One can go into a 7-11 or its equivalent and buy a perfectly lovely little salad with a wafu dressing, a variety of onigiri, and so forth. Again, there is absolutely no comparison with the things we call convenience stores here.

I noticed also that almost no women have long black hair. Layers, dyed brown. Most of the women remain extremely skinny, and some look as if you pushed their foreheads lightly with an index finger, they would topple backwards. But that’s not really a change. Certainly there was a lot less of the Namie-Amuro look (fake tans, orange or white fingernails, bleached hair, anorexic body perching on high boots) but still a lot of the same weird quirky fashion tropes I remember even back from the late 80s, often involving various types of socks and legwear.

All this is to say, from my tourist’s perspective, things in Japan seem to be even better than they were when I lived there, but that could very well be because I (sadly) do not live there. What’s truly wonderful, though, is the ways that Japan does not change, and how one can feel the ancientness even inside all that sleekness.