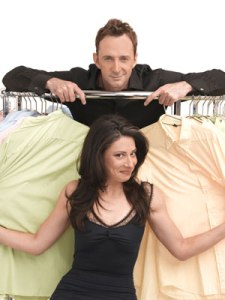 Gary and I have a big TV, but it gets no reception, and is basically just a 42″ screen for watching groovy DVDs from around the world. Pretty much the only time, then, that I ever watch anything like a TV show (aside from the Project Runway seasons G. and I both watch religiously on DVD or YouTube) is when I am in a hotel or when I fly Jet Blue. Jet Blue seems always to have a channel that plays continuous episodes of What Not to Wear, and when I am not flipping back to check out Animal Planet this is what I watch on board the flight.

It’s always a very emotional process for their victims to be stripped of their wardrobes and made to refashion themselves according to Stacy and Clinton’s rules. Exposed in front of everyone, they are shown confronting their deepest complexes and body issues (or “figure faults,” in 50s parlance) and told how to “conquer” or “hide” them.

By the end, each victim testifies to having undergone a kind of religious conversion or personal rebirth. They often do look genuinely better, happier, even healthier, when Stacy and Clinton get done with them. But still, there is something about the show that I find really profoundly disturbing: its primary aim seems not to help people become more like themselves, but to normalize them into a kind of shiny corporate appropriateness.

Stacy and Clinton hate anything “quirky” or “bohemian.” If they had it their way, every woman would be clad in form-neutralizing black pants and a cute-but-dignified empire-waisted blouse, and maybe a “fabulous” pair of kitten heels that look as blandly designer-y as they must be excruciating. Everyone at the end of the show ends up looking sort of like a mannequin from Express. The hosts might make the victims look more “attractive,” but invariably at the expense of their uniqueness. It isn’t just that they lose their pathos, because in a way that is just transformed. What they really seem to lose, if I can get away with saying this, is their essence.

I looked around on YouTube for the opening sequence of What Not to Wear, but couldn’t find it. Maybe you know it? The two hosts, Stacy and Clinton, are shown walking around New York City instantly changing people’s outfits from donts to dos like a couple of interventionist fairy godmothers.

One of the transformations I find personally offensive: a beautiful woman with long frizzy hair wearing a Palestinian or Bedouin dress is transformed into an “office lady” with a cute little 40’s blouse and frizz straightened into middle-class acceptability. Isn’t this indicative of a kind of ethnic self-loathing? At least on the part of Stacy, who, come on, has got to be a Jewish girl from Long Island, right? Or on the part of the executive producers, five of whom have fairly obviously Jewish names? Or if not self-loathing, doesn’t it show a more general bias against “ethnicity”? As I mentioned, I couldn’t find the sequence, but here’s me doing the “before” persona (pictures of me with my hair straightened, yes, I do have some, are so odiously bourgeois-looking that I will indulge in some rare self-censorship for once): 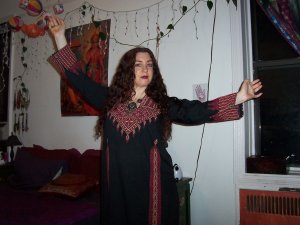 I mean, OK, I probably couldn’t walk into an office dressed like this, especially with the fake Bedouin facial tattoos, but so? Stacy & Clinton, wanna make something of it? Go ahead, STRAIGHTEN MY HAIR, I dare you.