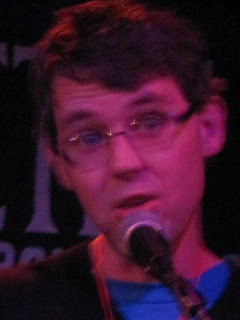 Stan Apps is the author of many wonderful books, including
Grover Fuel
Info Ration
God’s Livestock Policy
Princess of the World in Love
Handbook of Poetic Language
Oracular Vagina Takes Her Place Among World leaders
and most recently, a book of political/philosophical/poetic essays, The World as Phone Bill, a brilliant excerpt of which is available online as an e-book, Universal Stories with Unknown Particulars
On his Blogger profile, Stan lists, tellingly, his interests as
* mistakes     * faux-certainties     * temporary realizations     * ignoring the consequences of my own thoughts
this last strikes me as a boldfaced lie, since the (prolific) consequences of his (prolific) thoughts take the form of writing, writing, and more writing that invariably situates itself in inquiry and critique. As to the other three interests in his list, mistakes, faux-certainties, and temporary realizations, I should like to point out that Stan has fairly recently become a scholar of the law, the very purpose of which, of course, is to punish mistakes, affirm certainties as truth, and inscribe realizations into precedents that create at least an illusion of permanence.  Stan, I am guessing, enjoys being in the middle of the contradiction between his interests and his future profession.
Stan loves the forms of logic and bends them to his advantage.  At the same time, he knows, as every aspiring lawyer (and poet, and human being) should, that logic is fallible, and that is one of the many reasons we require poetry. Thus, he stretches the boundaries of each:  his rigorously thought-through essays strain towards poetry, and his poetry strains toward logic, and all this strain is pleasantly maddening.
As the title, “Universal Stories with Unknown Particulars” suggests, he is obsessed with the polarities of the particular and the general, oneness and manyness, boundaries and boundarilessness. He addresses this obsession in his “Handbook of Poetic Language,” in which he characterizes poetic language as “unsuccessful”:
“Language becomes unsuccessful when it fails to articulate difference effectively.  Successful language is primarily focused on depicting degrees of similarity….Unsuccessful language admits the possibility that people are not separate.  When we begin to communicate poetically, the question of similarity disappears and is replaced by the question of boundary, and the answer to the question of boundary is ‘no.”  ….Language is… the fact” of others.  Thinking makes into organelles of a long-lived monster with its feet in a sing-songy poem…. We are follicles of this long lived monster, whose name is not even English.  Poetic language deals with our shared experience of being multiple and indistinct.”
His work is luscious with thinking: bawdy, silly, ironic, compassionate and feminist (in God’s Livestock Policy he describes someone who I guess is himself as “ a womanish man who sheds plump homemade tears as nourishing as chicken soup when faced with news of new atrocities”). I don’t exactly know what the word genius means (do you?) but I really love this pronouncement of Stan’s from his chapbook, “Soft Hands”:
“All it takes to be a genius is to not be embarrassed by the wiggleiciousness of thoughts.”
Please welcome the unembarrassed wiggleiciousness that is Stan Apps’ genius.
**********************************************************
CAROLINE BERGVALL

(photo by Kaplan Harris)
@font-face { font-family: “Times New Roman”; }@font-face { font-family: “Berkeley”; }p.MsoNormal, li.MsoNormal, div.MsoNormal { margin: 0in 0in 0.0001pt; font-size: 12pt; font-family: Berkeley; }table.MsoNormalTable { font-size: 10pt; font-family: “Times New Roman”; }div.Section1 { page: Section1; }
Charles Bernstein has written that “Caroline Bergvall has emerged over the past decade as one of the most brilliantly inventive poets of our time.” Marjorie Perloff has lauded her as an example of what she calls “unoriginal genius” for her uses of reframed and appropriated language.
Born in Germany, and raised in Geneva, Paris, New York, and Oslo, she has been based in England since 1989. Her work has been commissioned and presented internationally. Her most recent projects can be found at the Hammer Museum in LA (w Rodney McMillian); our very own MOMA, NY; the Dia Arts Foundation; the Tate Modern, London; Museum of Contemporary Arts, Antwerp.
Her many books include Eclat (Sound & Language, 1997), Goan Atom, 1 (Krupskaya, 2001), and Fig (Salt, 2005), and most recently Meddle English (Nightboat Books).
Vanessa Place writes in a recent review of Meddle English that

The collection works as an argument for language as such—not for the incommunicability of language, but rather its hypostatic features. In other words (and we are lousy with words), its fundamentally fundamental nature, its capacity for scaffolding, its ability to wear a mask that masks nothing.

Multivocal, multilingual, multimedia, multistrategic, multiepochal, multivalent, Bergvall truly dives into the wreck of Babel and recovers from it mysterious and intriguing objects and experiences that find places on walls, on pages, and in ears.
Please welcome the estimable Caroline Bergvall.

Abigail Child is a media artist and writer whose original montage pushes the envelope of sound-image relations to make, in the words of LA Weekly “brilliant exciting work…a vibrant political filmmaking that’s attentive to form.” Winner of the Rome Prize, a Radcliffe Institute Fellowship, both Guggenheim and Fulbright Fellowships, as well as participating in two Whitney Biennials, 1989 and 1997, Child has had numerous retrospectives including the Buena Vista Center in San Francisco, Anthology Film Archive, Harvard Cinematheque, Reservoir-Switzerland and most recently at the Cinoteca in Rome. She is author of THIS IS CALLED MOVING: A Critical Poetics of Film (2005) as well as A Motive for Mayhem (1989), Mob (1996) and Scatter Matrix (1999) among others. She is currently completing two poetry manuscripts and editing a feature shot in Italy of the life of Percy and Mary Shelley, in the form of imaginary home movies. A book with interview and articles on her work, in both French and English, accompanied with a DVD, will be appearing in early 2011 out of MetisPresse, Geneva, Switzerland.

And now, with apologies to Dziga Vertov…

Along with her kino-eye, Abigail is keen of ear, She is a bi-sensual prestidigitator. She, a focusing device, shows you the language as only she can hear it. Now and forever, she frees herself of immobility, her words are in constant motion, she draws near, then away from them, she crawls under, she climbs onto them. With them, she moves apace with the muzzle of a galloping thought, she plunges full speed into a phrase, she outstrips running stanzas, she falls on her back, she ascends with an idea, she plunges and soars together with plunging and soaring bodies. Now she, a room of flickering sound, flings herself along the alphabet, maneuvering in the chaos of meaning, recording movement, starting with movements composed of the most complex combinations… Within the chaos of meanings, running past, away, running into and colliding – the words, all by themselves, pulse with life.