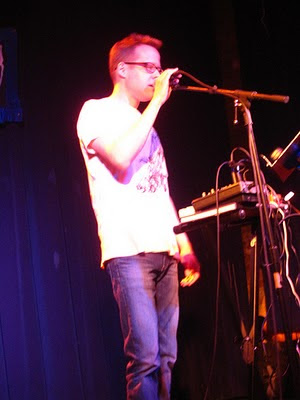 Flarf, in case you haven’t heard, is dead. Dead as stone.  Dead as a herring. Dead as the proverbial doornail or dodo.
Or maybe… it might be more accurate to say… as dead as Lazarus.  Or as a zombie. Or better yet… as dead as…Jesus Christ?
Flarf, dead as it is, lives on more intensely, more exquisitely, really, in its resurrected mode: post-flarf.  In post-flarf (not to be confused with the listserv of the same name), the writings of the original flarfists perform the miracle of becoming more intensely what they already were. In the case of Drew and others, this often means becoming more and more “lyric,” whatever, indeed, (and I won’t try to parse it here) that actually means.  Sina Queyras, on her Lemon Hound blog, recently asked me to expound on the connection of flarf to lyric, and here is an abridged version of my response to her:
Well, if I think of the pre-Flarf or non-Flarf poetry of several in the group, I notice immediately a tenacious (almost nostalgic) attachment to the lyric mode (against what was a predominantly anti-lyric mood in inventive poetry at the time the Flarflist started). I’m thinking here especially of Drew, Jordan, Sharon, Rodney, Ben, Edwin, myself, and someone else who shall remain unnamed here although I once collaborated with him on an almost hyperbolically lyrical book. It’s almost as if Flarf emerged partly as an explosion of repressed lyricism that was avant-garde-ishly self-justifying in that it used the mask of appropriation to say what the murkiest parts of our selves wanted to say.
Drew’s extraordinary new book, CHOMP AWAY, is a paradigm of virtuoso post-Flarf.  Years of chop-honing have paid off:  next stop:  Carnegie Hall. Let’s take a look at the cover for a moment.  It seems abstract, does it not?  And yet it echoes his brilliant compositional method, which he kindly outlines in an afterword to the book:
[sorry I need to type this in later]
His method makes explicit and elegant what any poetic composition always already is:  a collaboration between authorial subjectivity and the collectivity of language.  One of the many things that makes Drew’s poetry especially rich, though, is the breadth of his interests and fields of inquiry: psychology, video games, astronomy, global politics, animal behavior, film, visual art, conspiracy theories, and all musics, from the most obscure experimental stuff to Fleetwood Mac.  The meshing together and enjambments of all of these subjects dizzy and excite the mind.
Drew has mentioned to me in conversation his desire to write a poetry that is entertaining and accessible rather than rarefied and obfuscatory, and indeed the delectable maraschino of the poems is his colloquialism and signature absurd deadpan humor in plain statements like, “My eyes feel more Episcopalian than ever,” and  “I believe in being awake and asleep, in being around people who are also awake and asleep.”
Please welcome my dear friend, the popmeister of the apocalypse:  Drew Gardner.