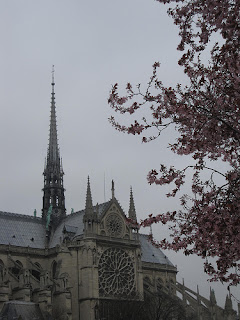 (not NYC, obviously, so not yesterday)

Yesterday was spring, so I went to yoga, got a bikini wax (ouch), had my nails painted pink with flecks of gold glitter, my toes magenta, got groceries (almonds, apricots, shiitake, Japanese persimmons – essentials) for my vacation-empty fridge, bought tiny pink roses, unpacked, spring-cleaned, napped.  Getting a bikini wax is weird:  more intimate than a visit to a gynecologist, but less intimate than sex, although I suppose it depends on the sex. The mama-san at the salon told me I had a nice body: “nice shape!  look 37, not 47!  younger than 37!” And as I was getting my nails done by her niece, with whom I discussed perfume at some length, she noticed ONE GREY HAIR in one of my eyebrows and hurried over to pluck it out.  I felt so cared for.

She also told me of a women-only Korean sauna/spa in Queens that serves what she says is amazing vegetarian food. The business card is only in Korean.  She says she never goes to Spa Castle anymore because “too famous: too many Americans” so I am not going to tell you the number or address of this place but if you want to go with me please let me know and we will make a pilgrimage. Spring is, ooh, so girly.  I am hoarding lace things just ready to whip them out and flaunt them.  Paris was springier:  just look at my pictures.  Magnolia, cherry blossoms, primroses.  Paris is better, but we knew that.  I don’t feel dolorous, though, because the very next day upon my return I was suddenly in rooms full of smart people and poetry and movies.  Maybe it’s precisely because New York is so ugly that we have to be so inventive.
At the salon all the women were talking about how the NYC subway is really the most disgusting in the world.  Back in 2002, my first post on this blog was about the necessity of aestheticizing it.  Of course, it is filled with art, and I appreciate that, even the bad art, but how about… a real overhaul?  Someone should really cough up for that instead of, I don’t know, missiles.
One of the women at the salon getting a pedicure was obese, with huge marbly white calves, and she was talking about how lazy she was.  She said she only goes from her bed to her kitchen, where she opens the freezer to see if there was anything to put in the microwave (she called it a “mic” – I mean, she was even too lazy to say the whole word), and if there wasn’t, she’d order takeout.  I thought, huh, what a weird way to spend one’s life.  She started talking about laziness because another woman who was a paragon of dynamism had just been in there.  The mama-san said she was a principal at some school in the Bronx, that she gets up at six every morning, works six days a week, has kids, goes running every day, and is always at every minute energetic. There really is a whole spectrum of ways to be in this world. I wouldn’t want a life like either of these women.  One needs languor, daydreaming, etcetera, to do what I (we) do, although in a way languor can be hard work, too.
I should really be living in Paris, at least for a while.  Stacey and I were discussing the idea of my next gentleman companion being French, and she said she’d keep an eye out for me.  I think that would be an interesting segue into the next chapter of my never-a-dull-moment life. Saying that, though, I am aware of how coming back here this time I slid right into my world here like a tampon or pessary… Saturday a wonderful Segue reading from Chris Sylvester and Dodie Bellamy, then Japanese food with the kids, then Abby’s amazing screening at Union Docs.
About Chris’ reading I think I will write later, because I want to articulate how I have been reacting to the New Conceptualists.  Dodie’s reading was incredibly moving.  Towards the end she got to a sentence about Akilah Oliver, where she asked, “Did we love her enough?  Do we ever love anyone enough?” and she got trembly, and nearly started to weep.  I thought to myself, no, we never do love anyone enough, although we sometimes try, sometimes to our detriment, sometimes to our credit. She read from her new book “the buddhist,” with which I can relate, as they say in Cali, “on many levels.” She gave me her book, and I wrote to her yesterday:

I looked at the book a little on the subway on my way to Abby’s screening (sorry I didn’t see you afterward at the Japanese place, if indeed you went there) and kept opening “randomly” to pages where you referred to my own vexing situation.  Of course I’d seen the blog posts, but it felt different somehow to see them inside that beautiful book.
I felt other parallels from my own life with your piece:  I once was involved with a “buddhist” who date-raped me (i.e. he decided that no meant yes, and wouldn’t ever come, and when I asked him after what seemed like hours why not he pulled off the condom I had provided for him and came inside me)…and I worked with him, in Japan, and he was so gross… kept photos in his desk of himself being fellated by Thai prostitutes…he went on to write a book about Vipassana meditation.  Ever since I have been wary of white male “buddhists.”
Then also my most recent book Scented Rushes was written for an emotionally avoidant manipulative & distancing type who kept me dangling on a string… we weren’t sexually involved, but I felt exactly that come here/go away energy that you describe in your book. He was a good muse for me – I was completely swept away by that tsunami, if you’ll forgive the metaphor – of that infatuation;  of course my overwhelming feelings for him were also part of what helped my marriage to disintegrate, which it clearly needed to, as bitter and wrenching as the separation has been.  Deepening, yes, certainly:  the only thing is, I’m not sure I needed to be any deeper.  Sigh.  Sometimes I wish I could just… chill. I’m sure you know what I mean.

Speaking of the tsunami, I do keep hearing from friends in Japan that they are fine.  I hope they remain fine.  I miss them so much and am so heartbroken about the devastation and the losses.  I want to do something for Japan.  What can I do? What should I do?  I welcome your ideas.
Abby showed three films, her Suburban Trilogy at Union Docs: Cake and Steak, The Future is Behind You, and Surf and Turf.  I sat next to Marianne, and whispered to her, “Abby is such a rock star!” and really she was, in a sharp little Italian suit, lime screen scarf, and baroque-patterned blouse. The films were inspiring (I always find Abby inspiring, her very presence on this earth).  I especially loved The Future is Behind You.  Here’s her description of it:

The Future is Behind You by Abigail Child. USA, 2004, 20 minutes, digital projection
A fictional story composed from an anonymous family archive of 1930’s Europe, reconstructed to emphasize gender acculturation in two sisters who play, race, fight, kiss and grow up together under a shadow of oncoming history.  Here there are at least 3 levels of research: 1) the home movie in which a family from 1930s Germany near the Swiss border poses for the camera, preternaturally happy;  2) the historical moment which remains as text trace, undermining the image and serving as covert motive for the action; 3) the development of gender identities—the innocent freedom of the elder transformed into socially bruised ‘bride,’ the irrepressibility of the younger moving from tomboy to awkward, diffident adult. At once biography & fiction, history & psychology, The Future is Behind You excavates gestures to get at the heart of narrative; it seeks a bridge between private & public histories. Music by Jon Zorn, arranged and performed for the movie by Sylvie Courvoisier and Mark Feldman.

Melissa Ragona introduced Abby with her ever-present & stunning intellectual vivacity, remarking especially on the importance/poignancy of the gesture in Abby’s films.  Later in the Q & A someone asked Abby how her undergraduate background in anthropology had influenced her filmmaking, saying also that he tended to be suspicious of people who study anthropology and then make films, and Abby replied that yes, she was, too, but that she considered herself to be “an ethnographer of the body.”  It is an apt description… she is an ethnographer of the face as well, of expressions as well as gestures; of course the face is part of the body, but it’s the body part that signifies so intensely that it almost becomes something else, the way the mind is part of the body but we think of it as something different because it’s just almost too much to take in at once.
OK, so I must go back to work today and should hustle.  I’m taking advantage of my jet lag schedule to write at this much length. More later, always, always, always, more later.