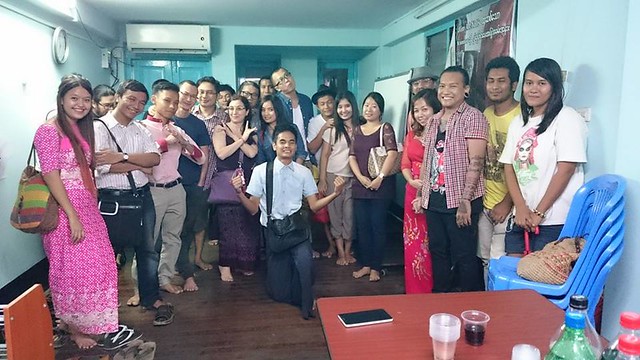 Thinking gratefully and continually about my amazing experience with the Myanmar poets in late May in Yangon, where I facilitated a poetics workshop called “Lies and Dreams,” and of how many wishes and visions for poetry we share despite our quite different contexts.

It was in a hot (but then, everything was hot, so hot that I described the weather as feeling like one had been wrapped in a wool blanket that had just been boiled) narrow room painted aquamarine in downtown Yangon,up several flights of stairs,  at the PEN center.  Just outside was the constant chaos of traffic, the almost uncrossable street filled with the candy colors of fruit and vegetable stalls and longyi (sarongs), the streets lined with majestically decaying colonial buildings.

Here is the workshop in a nutshell: we began by brainstorming things that others have told us that poetry should or has to be but that we disagree with (lies). I then gave them the task of writing something that followed those criteria. This elicited laughter, naturally. Since it was an anti-colonialist workshop, I welcomed them to write in their own language. Some chose English anyway.

We then took rather a longer time writing our own desirous visions for poetry (wishes), and the rest of the workshop consisted of going around the table, reading our wish lists, and discussing in some detail.

The younger poets (Flarf fans) who define themselves as “online poets” seemed to share a common vision in that they seemed most to value two things in poems: amusement and what they called “shock.”

One poet expressed desires for poems to wed with other art forms such as images or video, and said that for him poetry is everywhere, if not so much in poems.

Another said that poetry is a form of traveling, of going someplace else. One said that she wanted her poems to be able to speak to many different types of readers on different levels simultaneously.

Another, a doctor, said that she had recently delivered a baby, and that that was poetry.

One waxed philosophical and described poetry as a trace of Being, phenomena and noumena. Another said that he wanted poetry to always give him something new. I apologize for not naming names here; I do know the names of most of the attendees but not all, so I thought it fairest to leave them out here/

My brainstorm about my desires for poems:

and also impersonal — but not…”distanced” — located in the stuff of language, its feel on the eye/ear/tongue

I want it witty — can express “truths: but oughtn’t to settle in them — better, momentary insights

and I want it to resist descriptiveness

I want new chemical combinations in language — not just for the sake of weirdness like surrealism…too obvious, negates its own weirdness

I want everything to be in question

I don’t want identity (or at least not any simple definition of what identity might mean) so much, since going beyond it is a kind of nirvana

at my last comment a kind of ripple of understanding and agreement went thought the room. They come from a Buddhist culture and so they got that…Also, despite the intense governmental oppression they have always known,  some said they didn’t want to always write overtly politically or in any case “as Burmese.” Not all felt that way but some deemed that a kind of pressure and roundly rejected it.

They asked me, “Why don’t you become a Buddhist?””I’m not really one for -isms,” I said, “but Buddhism resonates for me in certain ways – its emphasis on compassion in the midst of the absurd suffering that is existence- and for some reason I am always attracted to Buddhist cultures and spaces”

Reading over my notes now several months later I realize of course that I’m not saying anything in my notes of desires for poetry that I haven’t said a thousand times before, and also that it isn’t a particularly novel set of wishes for poetry. I do think it is important for me now in what are very trying times in the US poetry world (I hope a painful growth period that leads to blossomings; indeed, what else could happen? the dialectic is always swinging, although I think it’s more like one of those pendula that go in whatever direction that “energy” is compelling them to go in) to keep clarifying to myself what it is I seek in poems.

One thought on “Lies and Dreams: a Workshop with Myanmar poets”